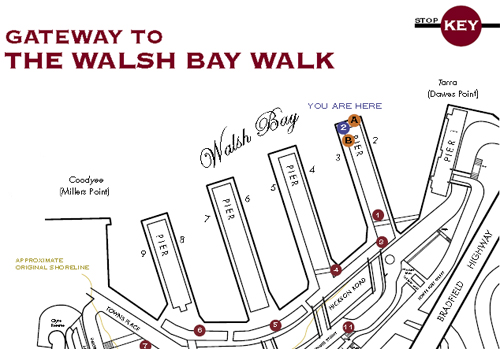 Just around the corner from The Rocks and Circular Quay, following the panoramic foreshore walk under the Sydney Harbour Bridge this free, self-guided tour is a meandering mix of new and old, artefacts and architecture.

At the end of the 19th century, without a seawall, the Walsh Bay foreshore was awash with rubbish and infested with rats. A major disaster changed everything in 1900 when Arthur Payne, a van driver, became the first person to contract the Bubonic Plague, which arrived in Sydney in January. The rats were brought under control and by August the outbreak was over. In October that year The Sydney Harbour Trust was established to rebuild the port of Sydney. Wharves were renewed and whole streets disappeared as the cliffs were cut down to form Hickson Road. New double-decked finger wharves were built with a series of bridges, which connected the upper levels to the high roads of Millers Point. In 1919, the wharves between Dawes point and Millers point were named Walsh Bay after the Trust's Engineer In Chief, H.D.Walsh.

In the years that followed Walsh Bay flourished on the back of vast cargoes of wool but by the early seventies the wharves fell into a period of disuse. It languished for a time until in 1982 Pier One was turned into a shopping and amusement complex. But the real transformation started when the Sydney Theatre Company and the restaurant took over wharves 4 and 5. Today, Walsh Bay is Sydney's cultural hub and award winning modern architecture sits happily beside heritage bond stores.

Take a step back; browse the historical artefacts, re-live the history of early Australia along the Heritage Walk. To be truthful, the walk is more of a wander and an exercise for the mind and senses. A wonderful way to lose yourself for an hour or so and recharge your batteries.